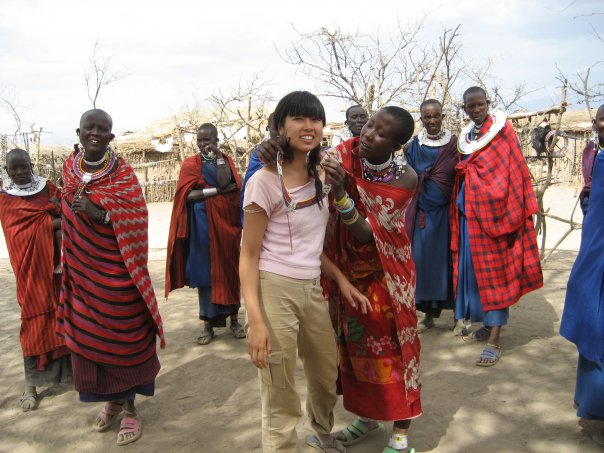 One of the most amazing things I have ever seen in my life is the migration of the wildebeest over the Mara River. Approaching the river that separates the Tanzanian Serengeti from the Kenyan Masai Mara is an eerie experience. Every minute or so, the carcass of a wildebeest floats by. In some sections of the river, the bodies collect in a massive pile and become a feast for scavenging vultures. Every year about one third of the wildebeest population ends their life crossing the river.

Hundreds of vultures scuttle and fly away in their masses as my driver whips through crowds of them. Beyond them, we reach a green pasture pulsating with the steady hum of thousands upon thousands of wildebeest. They look anxious and nervous, standing around, waiting for what lies ahead of them. Since memory, they have been migrating in an infinite circle around East Africa in search of greener pastures. From July to September, that circle brings them here, to this portion of river where they wait in suspense, perhaps deliberating on whether the river will claim their life this year.

My driver slowly wades through the herd of wildebeest and we enter a short forest that touches the water’s edge. I step out of the car and have a look into the river. On the other side are piles of mammoth crocodiles, some over five metres long, with curvy complacent smiles and very full stomachs. A park ranger holding a rifle saunters over to my car and I ask him to show me the place where the wildebeest actually cross (slipping him a few American bills). The ranger takes me north along the river. He stops to point out a few wildebeest on the other side of the river who attempted to cross in the morning. There are three of them, a young calf, his mother, and another buck. They are all wet and look sadly defeated, moaning and crying out to one another. They are trapped on a piece of landing by the water and must climb a steep 5 metre rocky incline in order to reach the other side. The mother makes a jump for it, summoning all her strength to leap and scratch her way out of the riverbank, but her efforts are quickly crushed as she slips down and falls to her knees. “They won’t make it”, the ranger informs us, pointing to their knees where the young calf and his mother were both bleeding. Unless they were bandaged, they would eventually bleed to death. But the young buck still looked relatively healthy, and as he watched the efforts of the mother, he jumped back into the water and tried swimming up the current, looking for another landing in which to climb out of the riverbank. Wildebeest are by no means swimmers, and after a few minutes or so he looks exhausted, but he treads on. After managing to tread himself a few metres up the river, he pulls himself out over another rock, and to his delight the barrier out of the riverbank is an easy gradual incline. He slowly walks up in triumph.

Somehow wildebeest manage to cross at seven o’clock am and three o’clock pm every day, on the dot. It’s a half an hour to three o’clock, and about ten metres away from me I see a wildebeest inching his way toward the river with a stream of his compatriots queuing up behind him in single file. He looks down into the river, grows nervous and turns around to walk away. After a few minutes he returns, summoning up his courage, before backing down again. He does this a number of times, but with three o’clock approaching, his retreats become less frequent and his resolve more steady. Finally, with one last look into the river he makes a stand, and at 2:57, he jumps in. This is no graceful swan dive, he makes an all out running belly flop, causing a great splash into the river. As soon as he emerges from the water, the next wildebeest in line makes the same running belly flop, followed by the next, and the next. The lead wildebeest swims for dear life to the other side, but when he reaches the other side he is met with a rocky cliff and can’t pull himself out of the water. The line of wildebeest behind him begins to panic, thrashing about in the water, some beginning to drown. The leader swims up stream and finally finds a rock to climb over that leads to a gradual incline out of the riverbank. He pulls himself out of the water and trots out of the riverbank. Meanwhile, more and more wildebeest jump into the river. They blindly follow the wildebeest in front of them, consequently making the same mistake as the leader. They each try to climb out of the riverbank from the rocky cliff, failing which, some manage to swim up stream to the safer landing, while others turn back, and while still others simply continue to panic and grab onto the wildebeest in front of them for support before drowning.

In the midst of all this chaos and tragedy, there is incredible joy. The wildebeest that manage to successfully cross the river are elated. They loudly call out to the wildebeest below, guiding them toward safety. The joy that overcomes them when they have successfully crossed is unmistakable. They have an extra hop in their step.

I return to the car to head back to my camp before dark. The driver crosses the river over a bridge and weaves us out of sight. Along the way I see streams of wildebeest, the lucky ones, migrating north up the Masai Mara. After watching their plight, a great appreciation for life overcomes me. This is punctuated by the occasional pride of lions I see along the way feasting on a young calf. True, life may be difficult, but it is precious …and my ephemeral woes are placed into perspective.